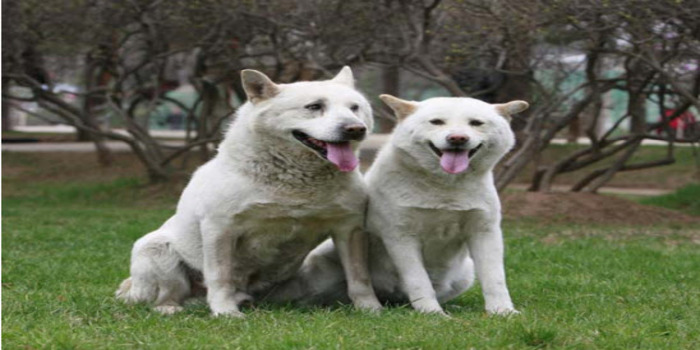 The Pungsan or the Poongsan dog is a medium to large-sized spitz-type Hybrid Dog, that originates from the harsh mountainous regions of Korea and is now considered to be one of the National Treasures of Korea.

These rare breed of hunter dogs were named after the mountainous region of Pungsan (present-day Kimhyǒnggwǒn), the place where they were originally bred.

The Pungsan dog is also known as the ‘Poongsan dog’ and is one of only three dog breeds native to Korea (the others breeds are the Sapsali and the Korean Jindo). The Pungsan is the rarest of the three and is practically a rare breed internationally.

The origin and records of the Poongsan dogs are absent and their heritage is speculated to date back to the Joseon Dynasty, which lasted from 1392 until 1897.

Many people claim that the Pungsans was ultimately the result of dogs mating with wolves in the area which is credited for their hunting ability, cleverness, and their aggressive natures. Some stories even refer to a Pungsan dog who defeated a Siberian Tiger in battle.

Developed in the harsh environment of northern Korea, the Pungsans can work in cold weather. The Pungsan dog is not currently recognised by any major kennel clubs.

The Pungsan has the characteristics typical of a Spitz breed; a plush double coat, wedge-shaped face, prick ears and a tail that curls over their back. They sport dark brown almond-shaped eyes that are alert.

Their sturdy bodies are strong and well-muscled, allowing for agile movement and great stamina. They are slightly longer than their height giving them an agile and rectangular shape with a broad and deep chest. Their limbs are straight while their paws are well-rounded.

Their abundant, thick coat is well designed to handle the harsh weather of the Korean mountains and comes in white and off-white shades.

These dogs are known to be protective and very loyal canines when it comes to their owners and their property. They are strong, agile, intelligent, affectionate and independent pooches.

A loving pooch for the family who thrives on strong human bond, the Pungsan is a family companion that loves its people and participates in the household chores.

Owing to their high prey drive instincts, the Pungsan dog makes it a poor fit for households with mixed pets, as they may tend to be aggressive with small pets like cats, rabbits, etc. With early socialization, it can learn to be gentle with other animals and pets and co-exist with them.

While they do have strong territorial instincts, they are not prone to barking unless it is truly needed, making them excellent guard dogs and watchdogs.

This breed is not recommended for the first time owners and requires a dominant and strong owner to be the leader.

Being an active breed it requires an hour of rigorous exercise schedules with proper mental stimulation daily to stay healthy and fit.

Pungsan will love to go for long, brisk walks on a leash, as well as runs and jogs beside you while you ride a cycle or bike.

The improper workout schedules make them restless and might even develop destructive activities like barking & chewing, etc to combat boredom.

Pungsan dogs require frequent brushing to clean their dead furs as they are heavy shedders. 2-3 times brushing a week will suffice its cleaning requirements. However, during their shedding season, they may require brushing and cleaning twice a day.

Clip the nails on a monthly basis and the teeth, which should be cleaned a few times per week. Bathing is necessary only when it gets dirty or has a bad odor. Their ears may be prone to infections due to water, dirt buildup and need regular checking to prevent infections and pain.

The Pungsan dog is a healthy breed with less genetic and health issues. However, it may suffer from some health problems namely;

It is advisable to visit the vet occasionally to minimize the risk.

Pungsan puppies are intelligent canines and can take up commands quickly if they desire. But, owing to their stubborn nature at times, they can be difficult to train. They need a dominating and consistent trainer who can lead him with authority.

Socialization: It means training your puppy or adult dog to accept new people, animals, by visiting various new places like dog parks, walks and more. By exposing him to these things and situations, your pet will adapt well to new surroundings and come over it fears and phobias. Well, socialized dogs are less likely to develop behavior problems and are generally more welcomed by others.

Obedience & Leash Training: Leash training is crucial to minimize its preying and chasing instincts. Start from an early age to make it familiar with the leash. When it plays or during its meal time apply the leash and take a short walk around the room or the garden and when it ultimately gets familiar take them out.

Try to end training on a positive note and reward your pet with treats for a good training session. This keeps training fun for you and your pet. Next time, your dog will be excited when it is time to practice!

These hardy dogs need high-quality food or homemade food that is nutritious and rich in fat, carbohydrates, and protein. You can offer them 2-2.5 of dry kibbles depending on his age and size to meet their energy requirements.

They are prone to obesity and bloating, and it is essential to visit a vet before opting for a fatty diet. Try to offer them small meals multiple times a day and prevent heavy exercises to minimize the risk of obesity.